Empathy is the ability to understand other people’s feelings. Most people are empathetic to varying degrees, meaning that you might be more or less empathetic than someone else. There are, however, a portion of people who have a complete lack of empathy.

As one of the many social skills you can possess, empathy is one that allows you to connect with others. The empathetic person experiences another person’s feelings as if they were feeling them. You can visualize being in that person’s place and experiencing what they are. Feeling empathy can also help you understand emotions, not just people’s emotions, but also your emotions of your own.

This level of understanding is important because it gives you the ability to react appropriately in varying social situations. Empathy can allow you to learn emotional regulation, which is often vital to your mental health. The smallest amount of empathy also encourages helping behaviors, either through your own actions or by triggering the actions of others.

There are three types of empathy: cognitive, somatic, and affective. A lot of empathetic people exhibit characteristics of all three types of empathy. Cognitive empathy allows you to feel a person’s mental state and their thought responses to a particular situation. Think of it as knowing someone in such a way that you can predict their reactions or actions to a certain situation. It is a less involved empathetic level because you are not really feeling emotions but rather how a person is thinking of responding.

Somatic empathy is more physically involved. You are emotionally empathetic when you can feel a person’s emotions as if they were your own. Similarly, affective empathy allows you to feel the emotions but you are also able to completely understand the emotions of others and provide appropriate responses. These two types are closely linked to one another. In fact, one will often rely on the other. For example, you understand other people’s emotions which allows you to feel them in a more pronounced manner.

As previously stated, empathetic people can exhibit empathy in varying degrees. It is possible for you to be more or less empathetic than someone else. A lower level of empathy, or only exhibiting one type of empathy, does not necessarily mean you lack empathy. Instead, it means that you have one area of empathy that is stronger than the other two. A natural leader, for instance, tends to exhibit stronger characteristics from cognitive empathy.

Lacking empathy at any level can pose numerous problems. On a personal level, you will not be able to truly connect with other people, which makes it harder for any kind of relationship. You will not share feelings and emotional understanding. People who lack empathy often have a behavior that seems disconnected, overly selfish, and have little concern for others’ feelings. This disregard often appears to others in a negative light because other people tend to take offense to the uncaring behavior. In fact, you may find that other people will actively avoid you if you behave this way.

People lacking empathy were often characterized as sociopaths or narcissists because of the inability to connect with others and their general disregard for anyone but themselves. The truth is that underlying mental issues do not always have to be the cause. Empathy is a skill that is both genetic and environmental. You inherit the capacity for empathy, but you are taught to build your empathy skills.

Some people are empathetic but only to a point where it becomes too overwhelming. This empathetic flooding can be the result of two things. First, you could be silently stifling your own strong emotions, unwilling to share what you are experiencing. The tiniest trigger can send you into an emotional hurricane. To avoid falling apart or asking for help, you stifle your feelings. You may find that emotional situations send you running from a room, often appearing insensitive or cold-hearted to others.

The second flooding that occurs is known as compassion fatigue. Your empathy allows you to feel so much from other people’s feelings, this includes your friends, your family, and even strangers. Constant emotional distress and negativity becomes toxic to you. To preserve your mental health, your mind shuts off your empathy. For some people, this emergency shut-down resolves itself but there are instances where the brain never turns the empathy back on without help. Recovery is often a lengthy process that will force you to deal with the initial reason for shutting down.

Trauma and post-traumatic stress can affect empathy. In this instance, you may have already experienced a flood of emotions, or you are still trying to regulate what you feel. Some people, especially children, shut down their emotional response as a coping mechanism. Fear is a powerful force.

Possible lack of empathy causes also include a total inability to emotionally relate to situations. You may find that you can only empathize in situations that you have personally experienced. In this instance, you do not have an emotional understanding of a situation that you have not been through yourself.

There are also a few mental disorders that can cause empathy issues. Such disorders, including anti-social personality, bipolar disorder, schizophrenia, narcissism, and psychopathy, affect many social aspects of the sufferer. In many of these cases, the disorder can be addressed but not all the symptoms can be reversed. Unfortunately, empathy falls into the latter in many cases.

There are several possible lack of empathy signs. The most common signs include difficulty making or keeping friends, constant conflicts with others, excessive criticism of others, and lack of appreciation. You may also notice a false sense of entitlement, and a tendency to blame others for their own experiences. People without empathy show no emotional response to the different situations that would normally evoke some level of emotion. You may also notice an unnecessary obsession with avoiding specific situations known to evoke emotions.

Other signs of no empathy include difficulty trusting others and difficulty believing others’ feelings. Without the ability to understand what others feel, there is no emotional connection. You may notice a doubt in what someone else feels or that you do not feel safe with someone because you cannot gauge their intentions. This mistrust and doubt further feed the need to be self-centered and criticizing.

Although it may seem like there is no hope for people who lack empathy, it is possible to build or rebuild this important social skill. You will need to start by seeking professional help. From that point, learn to address and understand your own emotions, and put yourself in social situations. You need positive interactions with others to be able to increase your empathy skills. Ask people how they are feeling and learn to listen.

Alexithymia is when someone has difficulty in expressing or identifying its own emotions. It’s a lack of emotional awareness. 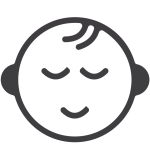 Understanding What is a Nervous Breakdown